‘Holding money lightly, not tightly – moving away from grief in money systems’ 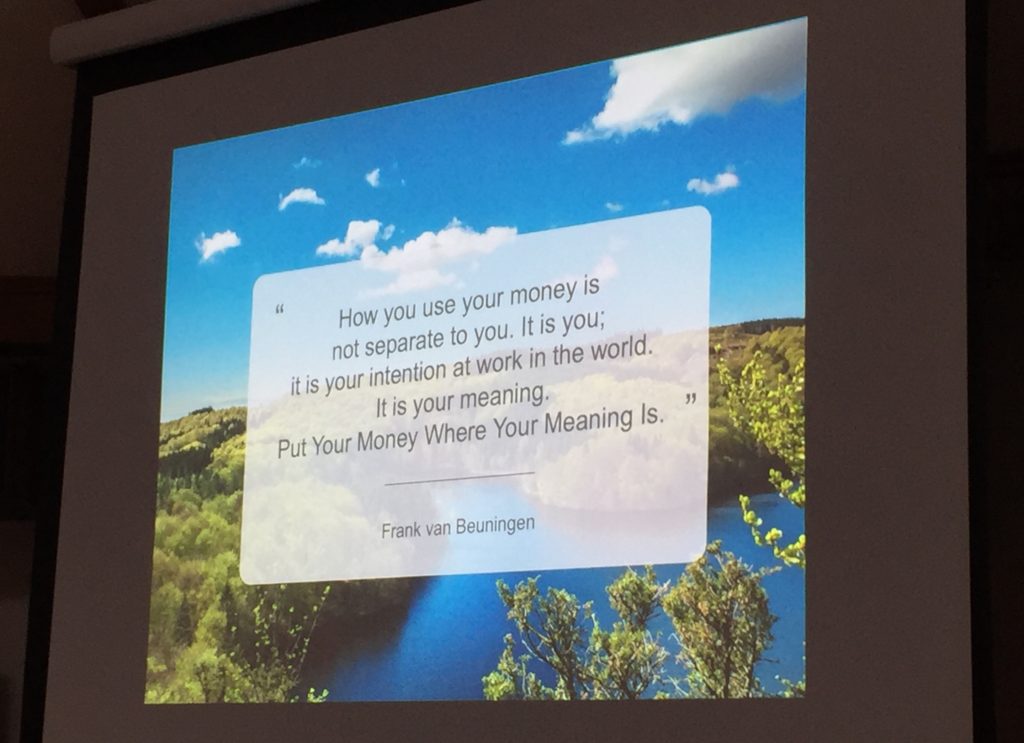 Recently, I was at the Findhorn Conference ‘Climate Change and Consciousness’ and attended a talk on ‘Good Wealth: How Capital is fighting Climate Change’ by Frank and Margaret van Beuningen. This very first slide caught me by surprise as I noticed the quietly persistent unraveling of a thought form in myself that revealed I had associated money with grief. I knew I had lived with a certain antipathy toward money much of my life, and felt a cognitive dissonance around being in a forced relationship with something that had been a bone of contention (and uneasy connection) between my father and myself. Whilst he seemed to think money was his answer (to various issues), my response to seeing that was to not really want anything to do with it! Rather challenging in a world where money really is the often used currency of exchange for many of us – certainly as a global economy. I had seen so much deception and damage done over the years also outside of my family unit, where companies seemed impervious to people and planet’s suffering as a result of their desire to gather more and more fiat currency (and power over) in order to secure their ‘position’ in a world economy that seemed to disregard its impact on planet, poverty and equality that their search to be top of the fiscal food chain obviously perpetuated. The slide ‘How you use your money is not separate to you. It is you; it is your intention at work in the world. It is your meaning. Put your money Where Your Meaning Is’ (Frank van Beuningen) facilitated an unexpectedly involuntary – positive – shift from this assumed association, toward curiosity. And I took that away with me.

A little later, somebody booked a singing session with me, to help her express and claim her voice as a healing singer.  We agreed a price – I felt safest keeping it within the bounds of the monetary ethos of Findhorn community (£50) and we met for the session the next day. At the session, we had tremendous fun. Tremendous fun. When it came time for her to pay me I heard my mind object ‘but we had so much fun, I shouldn’t be paid for this.’ However, her joy in giving her money to me was indicative of the gift she felt I had given her and I recognized a joy in receiving from such a person, with such a non-attached desire to appreciate. Luckily I noticed my reaction and how it shifted in response to the integrity of where she was coming from. At that moment I had a flash – the flash – of understanding about the existence of two systems of fiat currency. She was not losing anything by paying me – giving me her money – she was gaining the completion of an appreciation cycle… as was I. In fact, she might not have even been giving me ‘her’ money as much as allowing the gift of joyful appreciation to pass from her hands into mine, on its own community-weaving journey. I saw the old fall away and the simple truth of the ability to give to each other in multiple ways (time, skills, money, love, joy) as not needing to be ‘nickel and dimed’. It was not a quantitative quid pro quo but a qualitative gesture of active loving. For her money did not equate grief – it equated joy. From there, the following came to me as I contemplated this falling away of a kind of fiscal ‘corset’ from my trapped heart, held captive by grief. I saw my fathers’ fear around money didn’t have to be my own, I saw the historical suffering and control I had thought I had experienced growing up, lose all its meaning for me and I felt myself lift off into the clearly open skies of opportunity and possibilities for many enriching interactions into the future. I felt free… guilt free, grief free; healed around money. I understood that it all boils down to the energy of intention.

That may sound quick, but I am 54 and this grief had been with me for many, many years, waiting for me to be able to free it, a bird trapped in harsh netting, exhausted in its imaginary cage, tired of not being free, not being able to join in the literal flow of community interaction, and community, that the money system reveals. I had just thought it was wrong and had not known how to free myself from what was a very limiting, and wounding, belief. It’s a lonely place.

THE ENERGY SYSTEMS FLOWING THROUGH MONEY 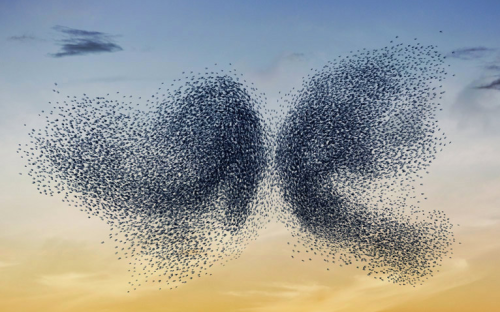 This may seem simple, but the realization I’m going to share here is profoundly affecting my understanding of what’s possible with transforming consciousness, and society, through conscious and free-will money engagement.

I now see that there are two money systems operating side by side: a good money system, and a bad money system. Excuse the simplicity but it’s feeling helpful to just name them in, arguably, this unsophisticated way. The two systems run, and run on, completely different energy. They have different driving imperatives. Whilst they are both fiat currency, (and this applies in blockchain currency, or any form of currency or trade system) one system is self-centered toward individualistic self-service (tight close circles e.g. nucleus family with firm boundaries) – running at a lower level of consciousness – and the other system is generated via mutuality and exceptional, higher, levels of generosity and love; an elevated level of conscious awareness, identifying with larger/extended community wellbeing.

For me, at least, this awareness makes it much easier and infinitely more joyful to consider receiving, to ask for money, and to give money in my system of choice because of the act of giving into, and receiving from, rather than taking away from, or appropriating. I know I’m working in a win-win system that leaves both parties enhanced and glad for the engagement.

In the alternative fiscal system (when I could not perceive of any other options) I experienced years of cognitive dissonance with the dark ( i.e. retracting) money energy, and it hindered my ability to materialise or generate wealth with a clear conscience – it was highly conflicting being in need of money but also in need of my conscience and self-ownership. Although I needed money, I didn’t want to support or sustain a dark system that sucks life instead of breathing fresh energy (chi) into life. In fact, the cognitive dissonance conflicted with my own personal call to give into, and receive from, our mutual community system – it wasn’t a community I could fathom being part of since I didn’t know there was another option away from the dark, and into the light.

And now I am exploring and imagining interacting financially inside a consciously co-creating, alive, intentional, world where money no longer destroys but actually connects and enhances, making you feel good about being in it (uplifted) and generating a positive life-affirming experience for all parties involved in the interactions that are embedded in its regeneration. 🙂  Now that, I like!

N.B. these columns are not designed to be exact opposites on each row. Also, energy cycles and moves creatively, based perhaps on exactly the story we are infusing it with? Possibly already matched with other people’s stories infused on it too? Steeping, like tea? But in DE tenet 1 ‘nothing is fixed’ allows for the possibility of change and transformation as we evolve into higher levels of perception and understanding. We are ultimately free – our ‘entrapment’ is an interior situation.

WHAT ARE THE QUALITIES WE CAN SENSE IN EACH SYSTEM?

EXAMPLES OF SAYINGS THAT MIGHT EXIST HERE (in our psyches)

This site uses Akismet to reduce spam. Learn how your comment data is processed.